With every new Apple product announcement, the biggest question that plays out on social networks and in blogs is whether or not the latest product is worth the upgrade. Spec sheets are compared to previous models, along with the difference in features, and judgment calls are made. Most of the time, those comparisons are made against last year’s model, making it very difficult to justify spending more money on Apple gear for most people. And rightfully so.

Looking at the Apple Watch Series 7, it’s all too easy to write it off as a minimal upgrade when compared to last year’s Series 6. The core differences come down to the Series 7 having a larger display, faster charging and, well, that’s about it.

It’s with that mindset that I started testing the Series 7 about two weeks ago. And for the first few days, I debated whether or not I should cancel my order of the Series 7 and go back to using the Series 6 I had sitting on my desk. 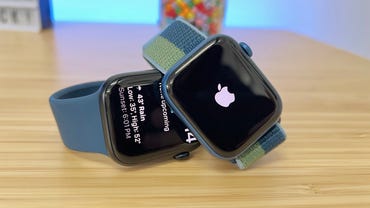 The more time I spent using the Series 7 on a daily basis, whether it was answering messages or tracking a workout, the more I grew to appreciate the small changes that have a big impact on the overall experience.

The overall design of the Apple Watch hasn’t drastically changed since it was announced in 2014. The square design with rounded edges has only grown in size, with very subtle design tweaks. That tradition continues with the Series 7, but on an arguably bigger scale.

Most of the size gains came from shrinking down the bezels that surround the screen, including new rounded edges on the watch face itself. You can actually look at the Apple Watch from the side now and see the screen’s downward slope, and read what’s on the screen.

A justifiable question that any Apple Watch owner asks when Apple changes the size of its smartwatch is whether or not existing watchbands will fit the models. The answer is yes. If you have watchbands that fit the smaller model, they’ll work on the 41mm Series 7. The same can be said if you have bands for the larger Apple Watch model, they’ll work on the 45mm Series 7.

Apple sent me a sample of the Blue for review, and I ordered a Midnight option for my personal use. Even the standard colors that we’ve come to expect from Apple are slightly different. For example, silver has been replaced by Starlight that’s a mix of gold and silver. More of a champagne, maybe? Midnight isn’t just black. It’s almost dark enough it can give off a hint of blue.

If you’re unsure of which color is right for you, I encourage you to go into an Apple store and look at the colors in person. The photos don’t really do them justice.

For the first few days of testing, I really didn’t notice the increase in display size. I mean, I could tell something was different about the watch, but not what. It’s like when someone gets a new pair of glasses and you see them for the first time, but can’t quite figure out what’s different. You just know they look different. That’s how I felt about the Series 7 at first.

It wasn’t until I started to reply to a message for the first time that it became abundantly clear the screen was bigger. The Series 7 is the first Apple Watch to feature a full keyboard on the display that you can type or swipe to type out a message. Previously you used voice dictation or the Watch’s Scribble feature, requiring you to write each letter out with your finger on the screen. It worked, but wasn’t the best experience, especially if you have bad handwriting as I do.

I hesitate to call the Apple Watch’s new keyboard a “full” keyboard, simply because it’s so small — but it’s applicable. It has a standard QWERTY keyboard layout that uses autocorrect just like the digital keyboard on your iPhone. You don’t have to be precise — in fact, I rarely was, just because the keys are so small — but WatchOS was able to accurately predict what I was trying to type out the majority of the time.

The end result of the keyboard means that I’ve been replying far more often directly from my wrist instead of reading a message, debating whether or not the reply would be easy to scribble out, then reaching for my phone to respond.

There are three new watch faces in WatchOS 8 designed specially to take up more of the screen real estate than was previously possible. The Contour face places the numbers for the analog clock along the very edge of the new rounded edge display. The Modular Duo face had enough room for two large complications, the first time that’s been possible. And the World Time face has more information than I know what to do with. Seriously, it’s overwhelming, but also kind of cool to see the time in all 24 time zones at the same time.

I experimented with the Modular Duo face quite a bit, and am still trying to figure out the right combination of two large complications on a single watch face. Having my daily schedule thanks to Fantastical and my Activity feed can get busy. Whereas having Fantastical and Dark Sky seems to be a good fit. I can’t wait until I travel again and can use the TripIt complication.

Even though it took me a couple of days to fully realize the potential of the slightly larger display, I’m sold.

Faster charging is possible, but there’s a catch

According to Apple, you can charge the Apple Watch Series 7 33% faster than the Series 6 going for 0 to 80% of charge in just 45 minutes with the new charger. For those who use the Apple Watch to track their sleep, 8 minutes of charge before you go to bed should net you 8 hours of sleep tracking.

But, there’s a catch. You can’t use just any USB-C wall adapter and expect to get fast charging speeds. In fact, you can’t even use Apple’s own
$129 MagSafe Duo Charger

to take advantage of the new charging tech.

According to an Apple support document you’ll need to use a wall adapter that supports USB-C Power Delivery. Apple’s own USB-C power bricks from 18W all the way up to 96W will work, and Apple recommends third-party adapters support Power Delivery at a minimum of 5W.

For most of my testing, I used the MagSafe Duo since it was what I already had set up and I prefer the compact charging solution. However, after the first week I realized that it was actually taking longer to fully charge the Series 7 each morning.

My normal routine is to wake up at 6:15 am and get ready for the day. I put my Apple Watch on the charger as soon as I wake up, and usually an hour later my iPhone alerts me that it’s charged and ready for use. That was the case with the Series 6 for the last year. However, I wasn’t getting an alert that the Series 7 was done on my iPhone until closer to 8 am.

So, after a week of slower than expected charging, I started using the charging cable that was included with the Series 7 and connected it to one of Apple’s 18W USB-C wall adapters. Since then, I’ve received an alert about 45 minutes later that the Series 7 is fully charged and ready for use.

If you’re charging overnight, none of this is an issue for you. You’re still going to have a fully charged watch when you wake up in the morning. But for people like me who have completely changed their charging routine in order to use the watch to track sleep, the charging adapter you use is a very important detail you need to keep in mind.

Even though there’s a lot to be said about faster charging, battery life on the Series 7 has been better than I expected. Unless I go on an extended outdoor bike ride and use GPS, the Series 7 gets through a full day of use and sleep tracking that night without needing a quick top-off charge. That’s better than what I was getting on the Series 6.

When I ordered my Apple Watch Series 7, the estimated delivery date was the middle of November. But as is usually the case with Apple, the company shipped it a couple of weeks early. I had already made up my mind by the time I got a shipping alert from Apple — I’m going to keep my upgrade. I’ll get a decent amount back for trading in my Series 6, easing some of the upgrade pain.

But if you’re a first time Apple Watch buyer, the Apple Watch Series 7 will be a real treat. The larger display with a full-size keyboard combined with its fitness features and deep integration with the iPhone continue to solidify its spot as the best smartwatch for Apple’s smartphone.