In 1820, the Danish physicist
Hans Christian Ørsted threw electromagnetic theory into a state of confusion. Natural philosophers of the day believed that electricity and magnetism were two distinct phenomena, but Ørsted suggested that the flow of electricity through a wire created a magnetic field around it. The French physicist André-Marie Ampère saw a demonstration of Ørsted’s experiment in which an electric current deflected a magnetic needle, and he then developed a mathematical theory to explain the relationship.

English scientist
Michael Faraday soon entered the fray, when Richard Phillips, editor of the Annals of Philosophy, asked him to write a historical account of electromagnetism, a field that was only about two years old and clearly in a state of flux.

Faraday was an interesting choice for this task, as Nancy Forbes and Basil Mahon recount in their 2014 book
Faraday, Maxwell, and the Electromagnetic Field. Born in 1791, he received only a barebones education at church school in his village of Newington, Surrey (now part of South London). At the age of 14 he was apprenticed to a bookbinder. He read many of the books he bound and continued to look for opportunities to learn more. In a fateful turn of events, just as Faraday’s apprenticeship was coming to an end in 1812, one of the bookbinder’s clients offered Faraday a ticket to Humphry Davy’s farewell lecture series at the Royal Institution of Great Britain.

Davy, just 13 years older than Faraday, had already made a name for himself as a chemist. He had discovered sodium, potassium, and several compounds and invented the
miner’s safety lamp. Plus he was a charismatic speaker. Faraday took detailed notes of the lectures and sent a copy to Davy with a request for employment. When a position opened as a chemistry assistant at the Royal Institution, Davy hired Faraday. 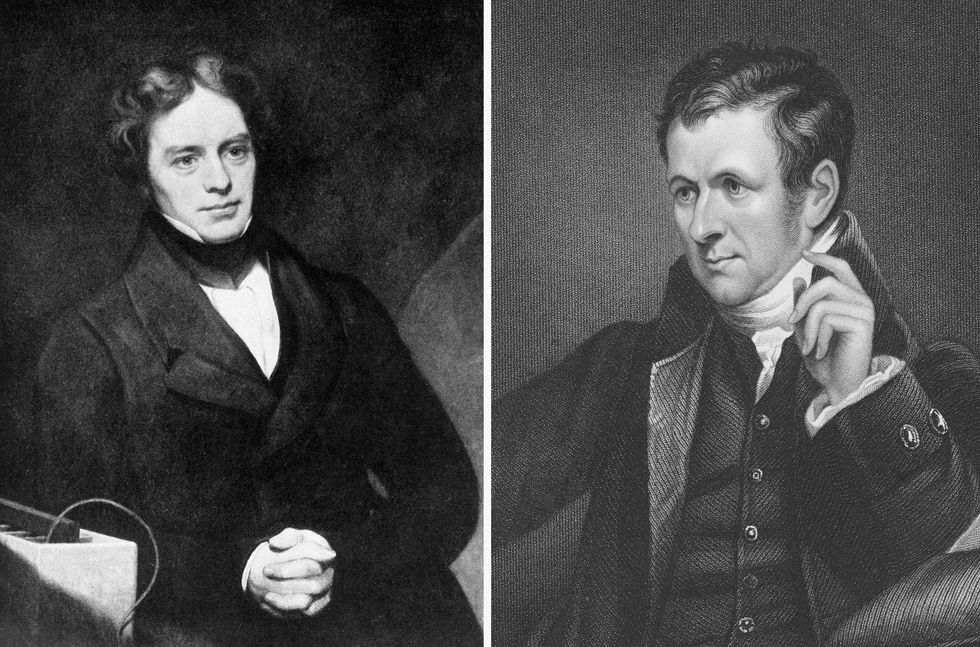 After Faraday [left] failed to acknowledge his mentor, Humphry Davy [right], in an 1821 paper on the electric motor, Davy accused him of plagiarism.LEFT: ULLSTEIN BILD/GETTY IMAGES; RIGHT: BETTMANN/GETTY IMAGES

Davy mentored Faraday and taught him the principles of chemistry. Faraday had an insatiable curiosity, and his reputation at the Royal Institution grew. But when Phillips asked Faraday to write the review article for the
Annals, he had only dabbled in electromagnetism and was a bit daunted by Ampère’s mathematics.

At heart, Faraday was an experimentalist, so in order to write a thorough account, he re-created Ørsted’s experiments and tried to follow Ampère’s reasoning. His “Historical Sketch of Electro-Magnetism,” published anonymously in the
Annals, described the state of the field, the current research questions and experimental apparatus, the theoretical developments, and the major players. (For a good summary of Faraday’s article, see Aaron D. Cobb’s “Michael Faraday’s ‘Historical Sketch of Electro-Magnetism’ and the Theory-Dependence of Experimentation,” in the December 2009 issue of Philosophy of Science.)

While reconstructing Ørsted’s experiments, Faraday was not entirely convinced that electricity acted like a fluid, running through wires just as water runs through pipes. Instead, he thought of electricity as vibrations resulting from tension between conducting materials. These thoughts kept him experimenting.

Faraday observed the circular rotation of a wire as it was attracted and repelled by magnetic poles. “Very satisfactory,” he wrote in his notebook.

On 3 September 1821, Faraday observed the circular rotation of a wire as it was attracted and repelled by magnetic poles. He sketched in his notebook a clockwise rotation around the south pole of the magnet, and the reverse around the north pole. “Very satisfactory,” he wrote in
his entry on the day’s experiment, “but make more sensible apparatus.”

The next day, he got it right. He took a deep glass vessel, secured a magnet upright in it with some wax, and then filled the vessel with mercury until the magnetic pole was just above the surface. He floated a stiff wire in the mercury and connected the apparatus to a battery. When a current ran through the circuit, it generated a circular magnetic field around the wire. As the current in the wire interacted with the permanent magnet fixed to the bottom of the dish, the wire rotated clockwise. On the other side of the apparatus, the wire was fixed and the magnet was allowed to move freely, which it did in a circle around the wire.

For a helpful animation of Faraday’s apparatus, see
this tutorial created by the National High Magnetic Field Laboratory. And if you’d like to build your own Faraday motor, this video will walk you through it:

Although a great proof of concept, Faraday’s device was not exactly useful, except as a parlor trick. Soon, people were snatching up pocket-size motors as novelty gifts. Although Faraday’s original motor no longer exists,
one that he built the following year does; it’s in the collections of the Royal Institution and pictured at top. This simple-looking contraption is the earliest example of an electric motor, the first device to turn electrical energy into mechanical motion.

The fallout from Faraday’s invention

Faraday knew the power of quick publication, and in less than a month he wrote an article, “On Some New Electromagnetic Motions and the Theory of Electromagnetism,” which was published in the next issue of the
Quarterly Journal of Science, Literature, and the Arts. Unfortunately, Faraday did not appreciate the necessity of fully acknowledging others’ contributions to the discovery.

Within a week of publication, Humphry Davy dealt his mentee a devastating blow by accusing Faraday of plagiarism.

Davy had a notoriously sensitive ego. He was also upset that Faraday failed to adequately credit his friend
William Hyde Wollaston, who had been studying the problem of rotary motion with currents and magnets for more than a year. Faraday mentions both men in his article, as well as Ampère, Ørsted, and some others. But he doesn’t credit anyone as a collaborator, influencer, or codiscoverer. Faraday didn’t work directly with Davy and Wollaston on their experiments, but he did overhear a conversation between them and understood the direction of their work. Plus it was (and still is) a common practice to credit your adviser in early publications.

When Faraday’s reputation began to eclipse that of his mentor’s, Faraday made several missteps while navigating the cutthroat, time-sensitive world of academic publishing.

Faraday fought to clear his name against the charge of plagiarism and mostly succeeded, although his relationship with Davy remained strained. When Faraday was elected a fellow of the Royal Society in 1824, the sole dissenting vote was cast by the society’s president, Humphry Davy.

Faraday avoided working in the field of electromagnetism for the next few years. Whether that was his own choice or a choice thrust upon him by Davy’s assigning him time-consuming duties within the Royal Institution is an open question.

One of Faraday’s assignments was to salvage the finances of the Royal Institution, which he did by reinvigorating the lecture series and introducing a popular Christmas lecture. Then in 1825 the Royal Society asked him to lead the Committee for the Improvement of Glass for Optical Purposes, an attempt to revive the British glass industry, which had lost ground to French and German lens makers. This was tedious, bureaucratic work that Faraday undertook as a patriotic duty, but the drudgery and relentless failures took a mental toll.

Faraday’s experiments of 1831 yield the transformer and the dynamo

In 1831, two years after Davy’s death and after the completion of Faraday’s work on the glass committee, he returned to experimenting with electricity, by way of acoustics. He teamed up with
Charles Wheatstone to study sound vibrations. Faraday was particularly interested in how sound vibrations could be seen when a violin bow is pulled across a metal plate lightly covered with sand, creating distinct patterns known as Chladni figures. This video shows the phenomenon in action:


Faraday looked at nonlinear standing waves that form on liquid surfaces, which are now known as Faraday waves or Faraday ripples. He published his research,
“On a peculiar class of acoustical figures; and on certain forms assumed by groups of particles upon vibrating elastic surfaces,” in the Royal Society’s Philosophical Transactions.

Still convinced that electricity was somehow vibratory, Faraday wondered if electric current passing through a conductor could induce a current in an adjacent conductor. This led him to one of his most famous inventions and experiments:
the induction ring. On 29 August 1831, Faraday detailed in his notebook his experiment with a specially prepared iron ring. He wrapped one side of the ring with three lengths of insulated copper wire, each about 24 feet (7 meters) long. The other side, he wrapped with about 60 feet (18 meters) of insulated copper wire. (Although he only describes the assembled ring, it likely took him many days to wrap the wire. Modern experimenters who built a replica spent 10 days on it.) He then began charging one side of the ring and looking at the effects on a magnetic needle a short distance away. To his delight, he was able to induce an electric current from one set of wires to the other, thus creating the first electric transformer. 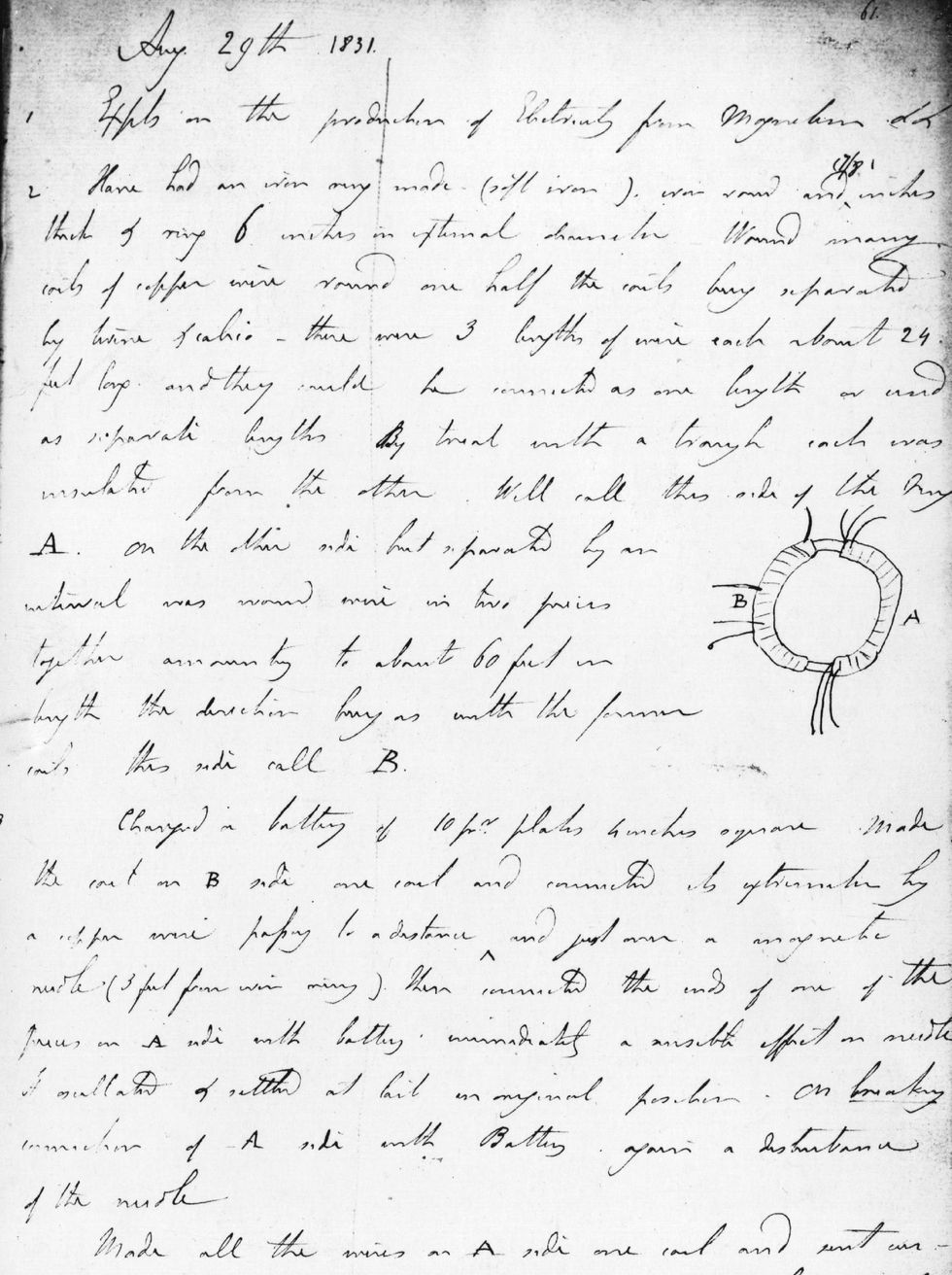 Faraday continued experimenting into the fall of 1831, this time with a permanent magnet. He discovered that he could produce a constant current by rotating a copper disk between the two poles of a permanent magnet. This was the first dynamo, and the direct ancestor of truly useful electric motors.

Two hundred years after the discovery of the electric motor, Michael Faraday is rightfully remembered for all of his work in electromagnetism, as well as his skills as a chemist, lecturer, and experimentalist. But Faraday’s complex relationship with Davy also speaks to the challenges of mentoring (and being mentored), publishing, and holding (or not) personal grudges. It is sometimes said that Faraday was Davy’s greatest discovery, which is a little unfair to Davy, a worthy scientist in his own right. When Faraday’s reputation began to eclipse that of his mentor’s, Faraday made several missteps while navigating the cutthroat, time-sensitive world of academic publishing. But he continued to do his job—and do it well—creating lasting contributions to the Royal Institution. A decade after his first breakthrough in electromagnetism, he surpassed himself with another. Not bad for a self-taught man with a shaky grasp of mathematics.

Part of a continuing series looking at photographs of historical artifacts that embrace the boundless potential of technology.

An abridged version of this article appears in the September 2021 print issue as “The Electric Motor at 200.”