The forex markets (and other markets for that matter) have been tending to go from key event to key event.  This week, it was the keynote address from Fed Chair Powell at the Jackson Hole virtual summit.

For good order sake, that summit was schedule to be a three-day event starting on Thursday and ending on Saturday.  However, when the Delta variant started to pick up steam, the Kansas City Fed (who hosts the event), changed it to a virtual summit, scheduled Fed’s Powell for 10 AM today, and that became THE event of the week and day.

Of course the Fed decision making authority is by a concensus.  The Fed chair has one vote out of 11 who vote on policy.  Of the 11, seven are board members and 4 are regional Fed Presidents (who rotate in and out every calendar year).  Although there are non-voting members, all have a say at the rate meetings.

So in reality, the Fed Chair can be out voted on policy each and every meeting (or vote).

Going into the speech today, the comments from Fed officials seemed to be overwhelmingly in favor of getting the taper going.  Today alone, before Powell’s 10 AM speech, Fed’s Bostic, Harker, Mester and Bullard expressed the expressed the desire to get taper started.

However, when the Fed Chair spoke, the market heard a more dovish view and certainly no definitive timetable for the taper. The chair punted, kicked the can down the road, remained on the fence….how ever you want to phrase it, there was no “start the process in September or October or November and finish it by end of Q2 2022”.

There are a lot of comments from the Chair that weighed toward disinflation whereas some of the other Fed officials were starting to raise the red flag on inflation stating we have reached “substantial further progress on inflation” and were just a school reopening, or lapsing of emergency unemployment benefits away from jobs being filled.  The Fed chair is simply not there yet.

As a result, the USD moved lower and was the weakest of the major currencies (the flow of funds went mostly into the “risk on” AUD and NZD which were the strongest of the majors – each moved over 1% on the day vs the greenback). 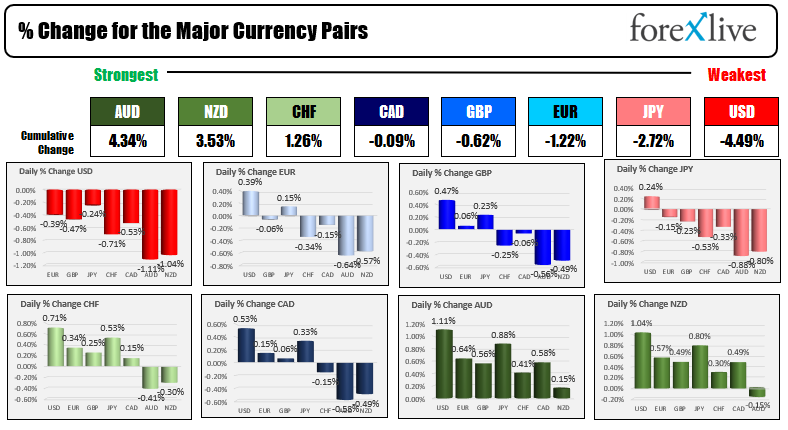 Rounding out the market moves:

Next week, the market event for the week will be Friday’s employment report which is currently expected to show a gain of 750K vs last month’s combined rise (revisions included) of over 1M.  That still is a good number, but will it be enough to get the Fed Chair from continuing to kick the can down the road?

Thank you for your support this weekend. Have a great and safe weekend.