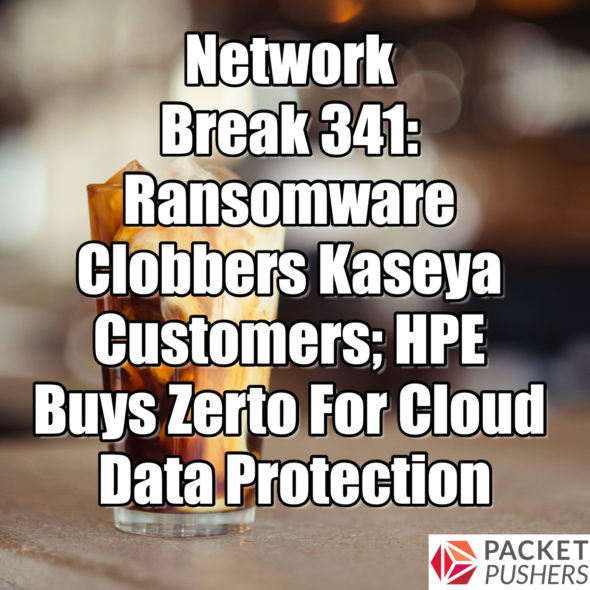 It’s time for a Network Break! This week we examine the fallout of the Kaseya breach that affected dozens of MSPs and many hundreds of customers, and discuss HPE’s interests in Zerto and Ampool, two acquisitions that extend the value of HPE’s Greenlake platform.

Fortinet goes after software developers with its acquisition of Sken.ai, the US Federal Trade Commission goes after Broadcom with allegations of monpolistic practices in the set-top box and broadband modem business, the US Defense Department starts over on its multi-billion cloud contract bid, and a court tells Netflix it has to pay network usage fees to a South Korean Internet provider.

Itential is network and cloud automation. Itential’s software makes it easy for network teams to get insights into your entire infrastructure, immediately detect non-compliant assets for rapid remediation, and manage and deploy changes across both CLI & API infrastructure. Find out more at www.itential.com/packetpushers.

We talk with Netskope about why IT can’t just take the office network out of mothballs and expect everything to be fine when employees show up. Guest Hansang Bae shares a punch list of tasks you might want to complete before your end users get back to the office.

The Kaseya Ransomware Attack Is a Really Big Deal – Lawfare

Apache Geode — Performance is key. Consistency is a must. – Apache.org